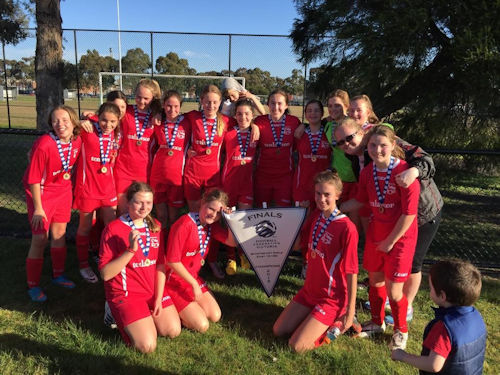 Ashlee has grown up with soccer in her family from a very young age. She started playing at Knox City Soccer Club because she was bored sitting on the sidelines watching her brother play and decided to join the team. She started playing in the first girls team at Knox in U12, before moving to Sandringham Women’s Premier League at the age of 15. She played open Women’s Soccer for multiple years, and also represented her State from U12-U18. In 2008, she was offered a full scholarship to Philadelphia University to experience soccer at a whole new level. In 2009, very suddenly, due to health and injuries she unfortunately had to end her playing career and her focus turned to coaching and teaching kids.
Ashlee is Junior President at South Yarra Soccer Club and coordinates 20+ Junior Teams and staff.
The Junior Development Program is highly regarded as one of the best in Victoria, and with the Club celebrating 90 years in 2018, it is a very exciting time to be a part of such a successful Community Club. Ashlee enjoys coaching and running programs for all ages, including her U11 and U16-U18 SYSC female teams.
Ashlee recently attended the 2017 Women in Soccer Forum at AAMI park, which brought together passionate people from all over Australia; with the focus on increasing participation, retaining female players and encouraging women to be actively involved in Women’s Soccer in Australia.
Something’s Ashlee had to say about the forum:
“The 2017 Women’s in Soccer Forum was a fabulous collaboration of passionate women and men, all with the same goal of getting females of all ages involved in soccer in Australia. It is a very exciting time for everyone involved in female soccer in Australia; with the Matilda’s being so successful in recent years and the participation level at a Community Club Level, NPL level, Region and State Team level all on the rise. I love being able to take my playing and coaching experiences and guide the younger generation of kids I work with everyday. Sport is so important for development, social skills, leadership, communication, body image, mental health and I think
with positive role models surrounding our kids we can provide them the best opportunities in life.”
Favourite Soccer Team: Liverpool FC

Ben has been involved in soccer since he started playing at South Yarra Soccer Club when he was nine. He began coaching in 2016; helping run the Junior Development Program at SYSC. Ben is a keen learner and always strives to improve every aspect of his coaching and playing career.
Favourite Soccer Team: Liverpool FC

Where I come from which is Laos, soccer is one of the most popular sports. I never had any formal training; majority of what I have learnt has been self-taught. Pascal plays Futsal and manages a number of senior Futsal teams in some of the top leagues in Victoria, including Futsal Oz and Futsal Plus. Pascal has extensive coaching experiences with South Yarra Soccer Club, Futsal Plus Juniors and Kickstart Soccer. Good Luck in 2018!
Favourite Soccer Team: Manchester United

Omar has been involved in soccer all his life; he started playing at the age of 5! He has extensive coaching experience in both volleyball and soccer, but continues to coach soccer at SYSC in 2018!

Luke has grown up with soccer his entire life. He played at his local club from u9’s to u18’s before completing his Level 1 FA coaching qualification in England. Since moving to Australia he has been playing for several teams and we are excited he will be playing, as well as coaching in 2018.
Favourite Soccer Team: Manchester United

We welcome back our Brazilian Coach, Matheus for another season of coaching at the Yarra in 2018. Matheus has several years of coaching and playing experience; growing up in Brazil where soccer is a way of life! We are excited to have you back and watch you build on last year’s knowledge and success.
Favourite Soccer Team: Cornthiam (Brazil)