Formed in 2006, the South Yarra’s Masters Team ranks amongst the most successful teams to have been fielded by one of Melbourne’s most iconic football clubs.

Built around ex 1st & Reserves players who had retired from Saturday competition, the team was renowned for their hard style of British football. The finished the 1st season in 2nd place.

The following 4 years brought 4 league championships & the enviable record of having only dropped points in a handful of games during that time. The team has evolved over the years, but at the heart of the team there is still a nucleus of the original South Yarra Saturday stalwarts who have now served the club for 20 years or more.

Our ultimate goal is to continue the tradition of the successful Masters’ teams of the past & field a team that is built on camaraderie & the desire to win. This is also in keeping with the club directive of ensuring we have competitive teams in every represented league

We invite players that are 35+ and who still have the passion, drive and commitment to want to play at a very competitive standard to come down to Fawkner Park & become part of this great club. We train every Thursday evening throughout the year, including the off-season, so much is our passion for the game.

If you believe that you still have the hunger & desire for the game & feel that you can contribute to the club from both, a social & playing perspective, please feel free to contact one of the following contacts from the Masters Leadership Group. 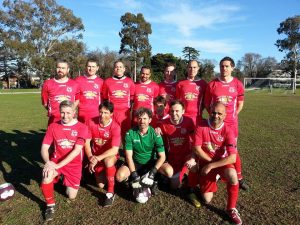